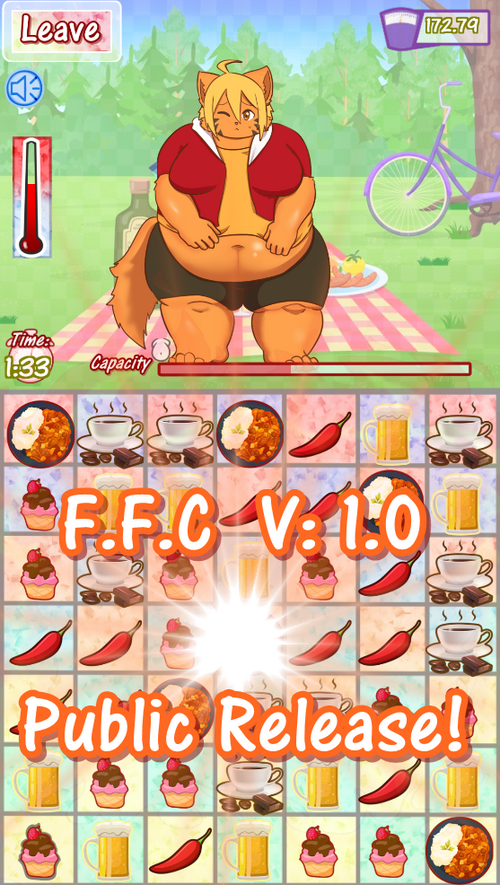 - Improved the visual quality for movile users of this game.

- Progression has been included in the game; Now every character must be unlocked by meeting certain requirements.

- 4 New foods were added to the game!

- A new character joins the game!

- "Solo mode" has now some sub-contest to choose from and play!

- "Flavor" has been added as an additional stat to food, and characters no more have a favorite food, instead, they have "flavor" preferences. (That will increase their gaining when eating that food)

- Modified the way stats are shown for characters

* Note: (Level up system is still in development!)

CPU is twice as fast, so I don't think I'm unlocking anything.

CPU contest feels way to hard to beat even on easy

I feel like redesign of how character stats are displayed well.. Looks somewhat worse now. It might be more clear but I was a favorite of how you could see the stats with stars and it wasn't also only tiny part of bottom screen. Now, this is just my personal opinion and you are free to develop the game the way you want. I just feel it felt that much better. Current design feels a bit.. As if it wasn't supposed to be that way. The blocks feel cramped together to be honest.

Sorry if my earlier comment turned out to sound a bit rude. I have started getting used to the new design and it does feel very nice and readable, despite my personal preference for how it should look like.

This was on easy, because at this time I was still learning how the contest mode worked. I had come across a really strong setup, and was getting better at it over time, but no matter how well I did I was utterly destroyed by nearly 300-350 points.

Eventually, I had a game where the setup clicked with me, and I was clearing the board so fast that it actually broke the board. Two slots in the top-left side of the board wouldn't fill with anything anymore. Yet despite this, I was still multiple hundreds of points behind the opponent.

Overall, I was curb-stomped by about 265 points in that game. I watched as I'd combo out nearly half the board and in that time frame the opponent would easily be outpacing me.

Toning down how fast the CPU gains points would probably be for the best.

Yeah, I felt this all the time, even in earlier versions. The game can retain it's quick play nature (when against CPU) but it would indeed be nice if they weren't being rockets in terms of speed.

Loving this release of the game so far, it really is starting to feel like a full-on game! And the idea of progression is quite exciting!

I did find a bug as well in the challenger event, when the player gets full and must tap their character to empty their capacity to eat again. If the auto-drain is what finishes the process of emptying one's capacity, the game locks the player's controls and doesn't allow for any matches to be made.

Anyhow, keep up the good work! I'm excited to see where you take this game next!

Thanks so much for the report and observation!